Livox, the DJI-backed lidar maker, has formed a strategic partnership with smart electric vehicle company Xpeng. Livox will be supplying automotive-grade lidar technology for Xpeng’s brand-new model slated for mass production starting 2021. This will provide the electric car maker with an industry-leading range-detection solution, in its bid to deliver a smart driving experience with superior safety and comfort, and introduce a new way of travelling that offers complete peace of mind to users.

Joining Forces To Push The Frontiers Of Smart Driving

Since its founding in 2016 as a subsidiary of DJI, Livox has consistently focused its research and product development efforts on enabling the mass production of lidar solutions in a cost-efficient manner, with the goal of overcoming the three bottlenecks in the lidar industry: high price, low production scalability and poor reliability. After four years of R&D, and backed by DJI’s expertise in smart hardware manufacturing and global supply chain management, the Livox team launched a series of brand-new vehicle-mounted lidar products in 2020, marking a new milestone for the mass production of lidar.

Livox and Xpeng’s collaboration is a timely response to the dawn of a new era of rapid advancements in self-driving technology and the rising popularity of concepts such as vehicles defined by software and built in with hardware. The application of lidar will elevate the smart driving experience by minimizing the limitations posed by purely visual recognition solutions, and providing added levels of safety for smart electric vehicles.

As one of the world’s leading smart EV companies, Xpeng is committed to revolutionizing data-driven electric cars, and answering the needs of a huge and growing number of tech-savvy consumers in the design, development, manufacturing and sale of its intelligent vehicles. Xpeng is a visionary innovator that is constantly breaking new grounds and embracing cutting-edge technology, in the burgeoning field of autonomous driving.

Enhanced Automotive-Grade Livox Horizon Takes XPILOT 3.5 To The Next Level

For this collaboration, Livox has completed a series of customizations for Xpeng using its vehicle-mounted lidar platform Livox Horizon, with the final mass-produced version boasting a range of industry-leading features. For instance, the detection range of the customised automotive-grade Livox Horizon will be increased to 150m from the 90m of the public beta version (for objects with 10% reflectivity). This enables Xpeng’s XPILOT 3.5 smart driving system to detect any remote obstacle much earlier with absolute ease while on highways and urban roads. Meanwhile, the customized version features a much higher resolution with a scan rate of 450,000 points per second. The increased point cloud density enables the faster detection of distant objects on the road surface, including pedestrians, bicycles and traffic cones. The horizontal FOV of a single automotive-grade Livox Horizon has also been expanded to 120° from the 81° of the public beta version. Through the mounting of dual sensors, the vehicle will have an ultra point cloud FOV of 150°-180°. This greatly enhances the smart driving experience by resolving many persistent challenges faced by drivers, including the removal of blind spots against overtaking vehicles.

In its product customization process, Livox has embraced DJI’s ethos of striving for top performance through simple product designs, and developed a brand-new “ultra FPS” lidar technology concept: Through a cleverly designed solid-state rotating-polygon mirror solution, the point cloud effect equivalent to a frame rate of 20Hz can be produced with an actual frame rate of 10Hz, and the amount of point cloud beams can be increased to 144 without the need for incurring extra cost with added laser beams. 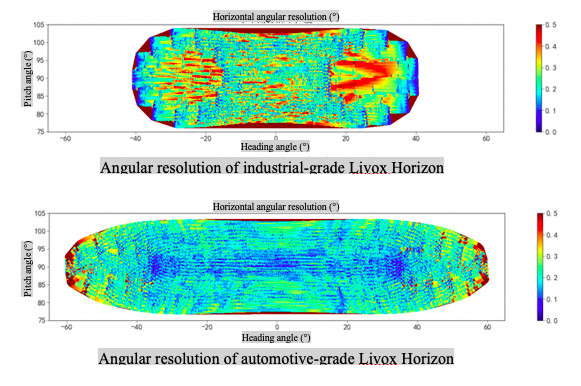 Higher point cloud density enables the automotive-grade lidar to create images that are flatter and more even. It is more compatible with the existing point cloud algorithms, and makes the development of such algorithms much easier. 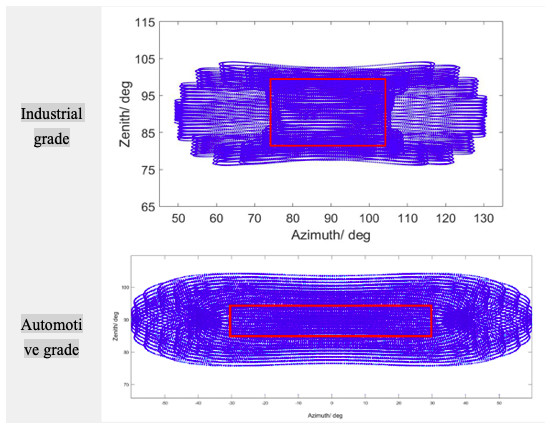 The lidar supplied to XPeng will be produced at Livox’s own brand-new automotive-grade manufacturing center. Equipped with world-leading SMT production lines and fully automated and streamlined processes, the manufacturing center will be able to meet Livox’s future expanding needs for the efficient production of its core lidar components. Meanwhile, the lidar assembly lines will deliver an annual capacity of 100,000 vehicles, and any expansion of assembly lines and production capacity in the event of increased customer demand can also be achieved within three months. Besides, Livox will be establishing its own independent test center for CNAS (China National Accreditation Service for Conformity Assessment) standards. The center will be able to perform over 70 items of the automotive-grade reliability test, and ensure stability and reliability requirements are met in the product development process through its top-class facilities.

Apart from its impressive manufacturing and testing capabilities, Livox has played an important role in helping to lower the material cost for lidar. Through its simple product design and the cost benefits reaped from bulk purchasing through DJI, Livox was the first company in the global lidar industry to bring the unit price of vehicle-mounted lidars within the RMB 1,000 ($150 USD) region. The company’s industry-leading manufacturing processes have boosted its production efficiency and yield, which in turn reduced its cost of production. Livox has amassed a wealth of experience in adapting precision manufacturing requirements to mass production needs, through the continuous supply of its product solutions to various sectors in the past two years, such as low-speed robot application, surveying, security, rail transport, and port container trucks. This has paved the way for the industry’s ability to meet the demand of the rapidly growing market for built-in automotive-grade lidar. Through its collaboration with Xpeng in spearheading projects involving built-in mass-produced lidar, Livox is well-positioned as a leader in the industry to revolutionize lidar, by making it more affordable and empowering its application in a wider range of AI scenarios.

Leading The Way As The “Eye” Of Autonomous Vehicles

As we approach the era of smart vehicles, consumers are exhibiting an increasing demand for a more comfortable and safer autonomous driving experience that is no longer a concept that is far out of reach of the masses. The partnership between Livox and Xpeng is motivated by the desire to provide users with a safer driving experience, by dramatically reducing the rate of accidents caused by the use of purely visual, millimeter-wave-based or other technical recognition solutions, so that the unique benefits of smart driving can be made available to everyone as soon as possible. By working with Xpeng, Livox is committed to developing ever safer lidar recognition technologies for the autonomous driving systems of the future, and becoming the “eye” of self-driving vehicles in propelling the industry forward.

Livox Technology Company Limited is an independent company founded in 2016 through DJI’s Open Innovation Program. Livox seeks to revolutionize the lidar industry by providing sensors that offer better performance at a fraction of the cost of traditional lidar units. By making lidar far easier and affordable to integrate into products and applications, Livox will transform innovations in autonomous driving, smart cities, mapping, mobile robotics and more. Livox products are sold in more than 30 countries around the world today, including Canada, China, the European Union, Japan and the United States.

You can unsubscribe at any time by clicking the link in the footer of our emails.

UP42 to Offer CATALYST Analytics on the UP42 Geospatial Marketplace